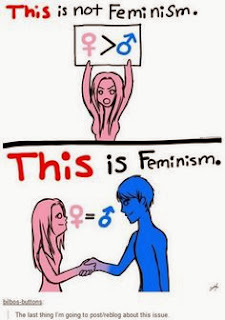 Most of us have added to this activism, at some point of time or another. Getting aggressive and enraged over unintended harmless remarks on women, digging out a feminist angle in almost everything, looking down on people if God forbid, they ever support men in any situation, the whole sing song about-‘You have no idea about what a woman goes through each day…’ begins. Yes, I know that it’s a hard world out there for the women. Yes, I know most of the time it is the women who are wronged. But, to drown oneself in self pity and present that as an answer to every question raised on women is wrong as well.

Yes, I know you must be thinking that I am a traitor of my own sex, that I am another of those women influenced by patriarchy to a level that she starts believing in their ideologies too. No, I am not one of them. I am a feminist, proud to be a woman and strongly feel for the cause of my gender but unnecessarily sensationalizing every second thing to be an assault on feminism or women rights is something that I find horribly annoying.

The other day I read this piece on how Raksha Bandhan propagates the idea of male superiority over women. I don’t understand why an innocent festival which celebrates sibling love has to be blamed for propagating patriarchy. No, it does not! It’s totally the way you wish to look at it. They might argue that it makes the little children believe that the brother is someone who should be looked up at with high regard (and is probably worthy of more respect) even if he is younger to the sister because according to tradition, the sister ties the ‘Rakhi’ to the brother who pledges to protect her always. May be the little children do start looking at it that way. It is our job to make sure the thought never crosses their mind also. However, if we are hell bent on believing that Raksha Bandhan is another tool of imbibing into every individual that men are above women, then there’s nothing much that we can do from preventing our children to think on similar lines.

Culture, tradition and value-system have evolved with time. The traditional celebration of festivals also has. I remember when I was little Raksha Bandhan meant selection of the most beautiful Rakhi for my brother, expecting the most beautiful gift ever and flaunting it the next day to my school friends, wearing pretty dresses, having delicious sweets and of course a holiday, that was pretty much all. The idea of it meaning the dominance of my brother over me did not even cross my mind for a split second, because I believe a child’s brain is too pure to even think of such lowly things. In fact, sometimes even my brother used to tie a Rakhi on my wrist, or I tied one on my mother’s wrist, we never quite went by some hard and fast rule. So, if we are so concerned about the male dominance occurring to our children, we may ask the brothers and sisters to tie Rakhi to each other, instead of having it just one way or maybe we can present the ideology behind the festival in a more beautiful way to them but let us not put blame the lovely festival for anything evil, it has given me a lot of sweet memories.

Then, there is this Tarun Tejpal sexual assault case, I have my utmost respect for the victim who came out strongly against the perpetrator. However, I was reading one of the replies to some tweet where someone asked why she went on the elevator with him for the second time. And, then began one after another outpours of comments like, ‘you are a sexist’, ‘it is the same mentality which makes one blame a women’s clothes for rape’, ‘you are a misogynist’, etc. Now, nobody is blaming the women for being assaulted, but it is genuinely shocking that you would consider going again in the elevator with someone who has sexually assaulted you the previous night. Correct me if I am wrong, but if you have been forcibly kissed, attempted at being disrobed and penetrated by fingers by a man on one night, you would not even consider coming close to him, leave apart getting into the lift with him again. I am not saying that this makes Mr Tejpal any less wrong for what he has done, but it does make the women appear a lot stupid, weak and defenseless.

We are getting to a stage where we are ready to believe that every time a woman suffers, she has either been wronged or used or cheated or misled or suppressed. We blame it on the misogynist society, on patriarchal norms and what not! What we completely ignore is that sometimes, it may have nothing to do with it at all. We get all charged up to take the feminist brigade forward every time the word ‘woman’ even pops up in any conversation.

Come on, let’s face it- all of us have different ideas of what we want out of life. We have our priorities set differently. Some of us value our career more than anything else, while there is another category for which marriage is more important and they wouldn’t even think twice before leaving their careers to devote all their time to the family. Not always is the second category forced to do it, sometimes they choose to do it. They have no complaints, they enjoy their life that way. To look at all of them with pitiable eyes thinking that they had to make a huge sacrifice would be very wrong on our part. This is what they wanted out of life and they are getting it.

A lot of women openly claim that one of the main parameters of choosing the right guy is definitely his bank balance. We never judge them, do we? We feel that it is important for a woman to be concerned about her financial security. Well, if we talk about equality then why do we have to depend on the guy for our financial needs? This question is often swept under the carpet. I believe if we do not judge women when they tick mark ‘hefty bank balance’ in the must-haves list, we have no right to judge men when they expect a homely girl. Else, it is plain hypocrisy.

Then comes this whole expectation of being respected and what not for just being a woman, what have we done to earn it! If we want respect, let our deeds be worthy of it, not plainly our gender. Feminism means equality and equality has little space for undue respect and honor and we must refuse to accept it as well.

It has all been bothering me of late, hypocrisy dressed as feminism is something that was annoying me. Everything highlighted to be an agent of suppression of womankind is just mere stupidity. We are digging unnecessarily and probably meaninglessly trying to find an element of suppression in every little thing we come across. We have probably started looking for little things to drown ourselves in self pity and exclaim, ’No country for women’. There is a country for women, exactly the one we are living in. Things have been terrible, I know. Life is a lot harder for women, I know. However, frantically linking every possible thing as an attempt to oppress women is not the solution for it, either. It might lead to a stage where feminists are looked upon as a group of hysterical, men-hating lot. Like somebody commented on a similar discussion, ‘Now, it is better to avoid women like you avoid cobras.’ I fear this stage coming, and trust me it will not be a pleasant one. We need to end that war, pretty soon at that!

Promote Your Page Too

Have something to say?